A showcase for Tamaqua Area community projects and people

Noteworthy Events in Our History

Paul Dodson, Tamaqua Hunger Walk chair, presents checks for $2,133.49 each to Maj. Sharon Whispell of the Tamaqua Salvation Army and Tina Kensinger, director of the food bank at Tamaqua’s Trinity United Church of Christ. Primitive Methodist Church in Tamaqua also received a Hunger Walk check. Together, the three food pantries serve over 250 families in the community.

Hunger Weekend was May 13-15 with activities including an Empty Bowl Dinner hosted by Zion Lutheran Church and a family film night hosted by Bethany Evangelical Congregational Church. Rainy weather forced the actual walk to move to May 22.

Cash donations from walkers as well as area churches, businesses and organizations totaled more than $6,300, up from $3597 last year.

Eighty-three boxes of food were collected by churches and community organizations and distributed equally to the three food banks. That was up from 48 boxes last year.

Civic and service organizations interested in participating in the 2017 Hunger Weekend can contact Paul Dodson at 570-668-0289 or by email at dodsonp@verizon.net. 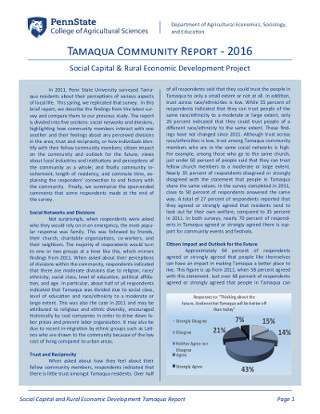 In 2011, Penn State University surveyed Tamaqua residents about their perceptions of various aspects of local life. This spring, PSU replicated that survey.

“Improvements in outlook were most noticeable in the open ended comments respondents made at the end of the survey. Several individuals praised the actions that have been taken to improve the quality of life in recent years and noted that people in the community are friendly and willing to help their neighbors.”

Newspaper report quotes Micah Gursky, executive director of the Tamaqua Area Community Partnership, “People come from all over the country and world … they come to see where their ancestors are from.”

Read all the coverage of the conclusion of the building renovation project witnessed by those attending the Tamaqua Historical Society Museum Open House as reported on December 21, 2015 in the Lehighton Times News.

Eileen Kuperavage (center)  executive director of the Schuylkill Area Community Foundation, accepts a check for $2,400 which represents the proceeds of the Pat Freeh-Stefanek Roast held November 6, 2015 to benefit the Patricia Freeh-Stefanek Endowment Fund.

Kuperavage is flanked by TACP executive director Micah Gursky (left) and former TACP Chair Pat Freeh-Stefanek. Patty served as TACP chair for 12 years and generously allowed herself to be “roasted” to build the fund balance.

Annual proceeds from the fund support the work of the Tamaqua Area Community Partnership. The perpetual fund was established in 2012 with $5,000.